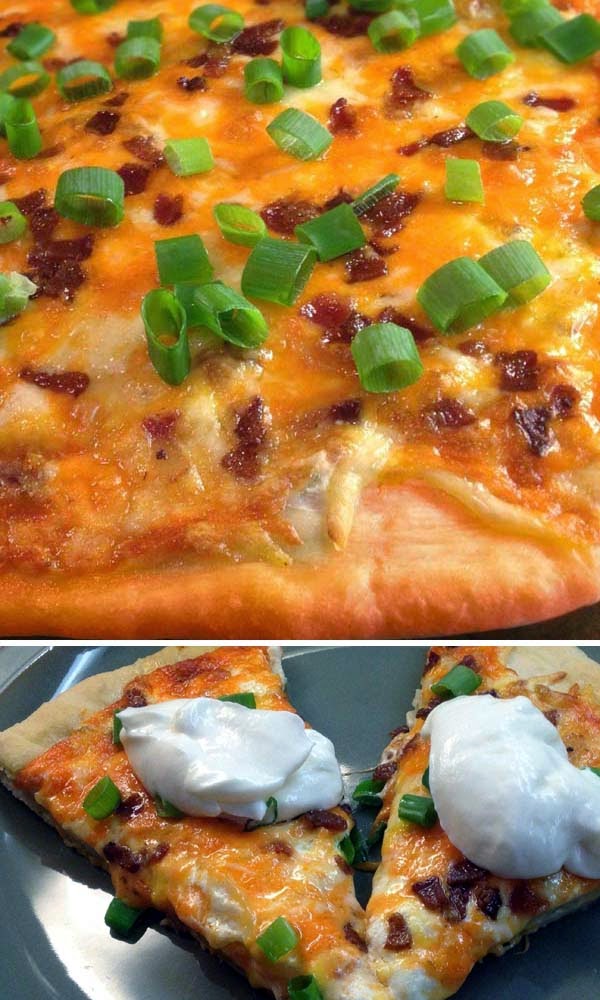 A delicious pizza I made for my brother and his friends during a football weekend. I also wanted to use a new baking stone. Using a cookie sheet is how I've made pizza before. A pizza stone is new to me. I thought it turned out well for the first time making.

Prepare pizza dough according to instructions or follow your favorite homemade recipe.

Pre-cook the sliced potatoes with spices in a large covered skillet with 2 cups of water. Cook on medium-high heat until potatoes are tender.

Remove lid and simmer until liquid is no longer present. Add about 1 teaspoon of cooking oil; toss potatoes so they don’t stick to skillet.

Watch carefully, as the potatoes can burn easily. Place cooked potatoes into a bowl and set aside.

In a bowl, mix sour cream and diced jalapeno together. This is an optional step since the cayenne pepper should give this pizza recipe the spiciness already. The diced jalapeno gives it a little bit more kick.

Assemble the pizza for baking. First, spread 3 tablespoons of sour cream onto the pizza crust.

Cover with sliced spicy potatoes. Spread the last 3 tablespoons of sour cream on top of potatoes.

Bake in a preheated 400 degree oven for 20 to 25 minutes. Before cutting, allow the pizza to sit for about 5 to ten minutes.

Serve each slice of pizza with a dollop of sour cream and some green onions.

A few things to think about --

Lately, I've beeng using gluten-free doughs. Taste different, but you get used to it.

Also, don't make the same mistake that I made by first assembling the pizza on a baking stone, then having to carefully remove the pizza and setting it aside while preheating the baking stone properly. That took another half hour or so. I'll know better next time.

Making this pizza seems like it's a lot of work than, say, something made with a slow cooker. But it's worth it. This very quick tutorial on how to cook a pizza using a baking stone in an oven should help you understand more about the process. Notice how the pizza was prepped apart from the baking stone. Doing so lets you pre-heat the stone inside the oven while the pizza is being assembled.

I had this the other day at Boston Pizza and absolutely loved it! I found this recipe while looking to recreate this at home. It is spot on and delicious. A little fiddly with the potatoes but it is a necessary step and the results are worth it. The kids devoured it and asked me to make it again and again. This will go into the regular rotation here. Thanks for a great recipe :)

What a fantastic recipe, I have to admit I am very much stuck in a rut when it comes to Pizza recipes, so I will most definitely be trying this! What are your opinions on perhaps baking a pizza on a BBQ

how to make pizza

The BEST! Thank you:D Everyone says this is the best perogy pizza ever, and bang on exactly like Boston Pizza's, except better! After using this recipe multiple times with consistent results, I've been told by the family that anytime it's perogy pizza night it can only be if I make it from this recipe!:) They no longer ask for Boston Pizza which used to be their all time favorite! I was even surprised how well it turned out on my first try too. Last time I used baby potatoes instead of large ones and this made it waaay easier because they're already bite sized when sliced and WAY easier to stir and cook in the pan as didn't fall apart at all or stick together as much like the larger ones usually do for me while frying, and didn't need to peel. By the way, one can try sprinkling cornmeal on the hot pizza stone (no oil - cornmeal ensures pizza won't stick to stone) after taking it out of the preheated oven; before sliding your pizza onto it using a piece of waxed paper also sprinkled with cornmeal that it was arranged on (can put the wax paper on a no-lip baking sheet but I just slide it right off the paper onto hot stone). If it's not sliding in some spots, lift up that side and put more cornmeal under. This works for us everytime. I do cheat by using pillsbury canned crust, we've yet to try it with the fresh deli dough. your recipe is perfect! Thanks so much!