Quinoa as Rice Substitute and Some Recipes to Consider

Here's something to think about. I've been reading about quinoa and its health benefits and how it could be part of my everyday diet. I tried quinoa at a girlfriend's house. She's been trying to lose weight and have been into a lot of diet plans without having to take pills. So her regiment includes a lot of running and plenty of quinoa in her meals.

For me, quinoa may take some time to get used to. It tastes different from rice. And will most likely need seasoning or learn some new tricks to make it taste "better". Perhaps going to cooking school could help me learn new cooking tricks. 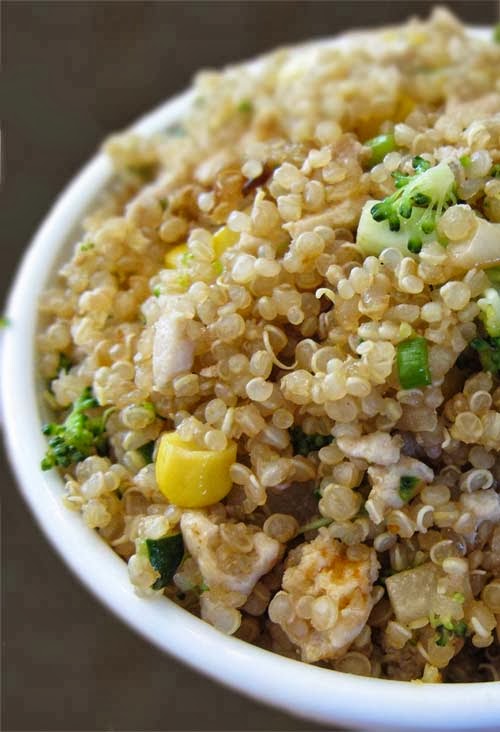 I make fried rice by using leftover white rice and cooking it in a frying pan along with other ingredients. The same applies in this case, so I first cooked quinoa in rice cooker. The water to quinoa ratio is the same, which is 2 parts liquid to 1 part quinoa. When the quinoa is done (rice cooker automatically shuts off), cool it for a few hours before frying.

In a frying pan over medium heat, pour two tablespoons of cooking oil. Cook the ground chicken until it turns brown. Add quinoa and stir for 1 minute. Be sure to spread the chicken and quinoa evenly just like when cooking rice. Add broccoli, zucchini, onions, and corn. Continue to stir for 1 minute then add minced garlic. Season to taste. Serve

Here's another recipe where quinoa was also substituted for rice. It's prepared without cooking quinoa first and using a slow cooker. 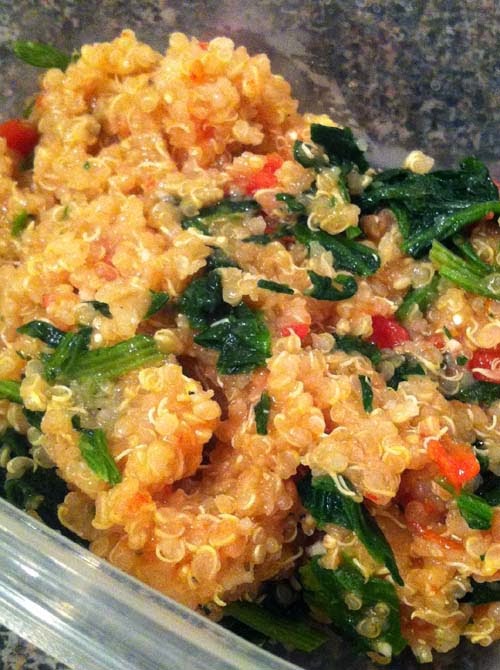 In a skillet, warm oil over medium-high setting. Stir in tomatoes and broth. Add onion powder to taste. Increase heat to high and bring to a boil.

Transfer to slow cooker. Add quinoa and season with salt and pepper. Cover and cook on low until most of the liquid is absorbed and quinoa is tender. It should take about 2 hours.

Remove cover and stir in spinach. If pilaf looks dry, add up to 1/2 cup more broth). Cover and cook 15 minutes longer or until spinach has wilted. Serve.

I like the health benefits I've been reading about quinoa. For one thing, they're a great source of protein which is great especially if you're into eating vegetarian meals:

Whole grains are a great source of protein, but the queen of whole grains when it comes to protein content is quinoa. Unlike many sources of vegetarian protein, quinoa contains all of the essential amino acids, making it a "complete protein". Just one cup of cooked quinoa contains 18 grams of protein, as well as nine grams of fiber. Other whole grains, including whole grain bread, brown rice, barley are all healthy protein-rich foods for vegetarians and vegans as well. Source: http://vegetarian.about.com/od/healthnutrition/tp/protein.htm

Also, quinoa is a great source of fiber:

Quinoa seeds are made up of more than 12 percent fiber. A single serving size, which is .25 cups, contains 3 g of dietary fiber. Thirty-six percent of this dietary fiber is soluble and 64 percent is insoluble. Soluble fiber forms a gel, which can work to reduce blood cholesterol and blood glucose. Insoluble fiber regulates bowel movements by helping material move through the digestive tract and increasing bulk. Source: http://www.livestrong.com/article/380474-fiber-in-quinoa/

Additionally, quinoa is rich in riboflavin:

Quinoa is rich in riboflavin, also known as vitamin B2. Riboflavin is essential for the metabolism of nutrients such as fats and carbohydrates. Like other B vitamins, riboflavin helps to increases energy. Quinoa contains approximately 21 percent of the riboflavin you need in one day. A deficiency in riboflavin can cause skin problems such as dryness and cracked lips. A riboflavin deficiency can also cause fatigue, depression and anemia. A deficiency most commonly occurs in individuals who have intestinal absorption problems or in individuals who do not consume enough vegetables. Source: http://www.fitday.com/fitness-articles/nutrition/healthy-eating/the-nutrition-of-quinoa.html 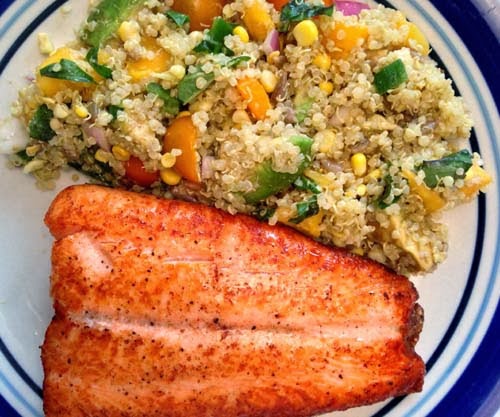