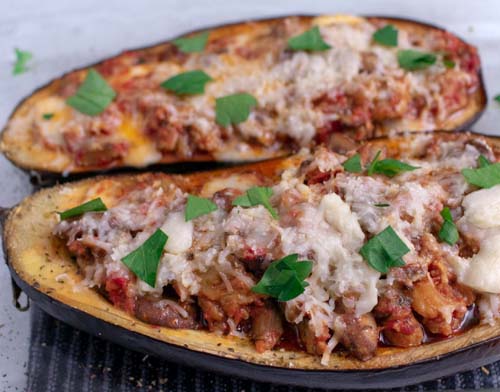 Here's another stuffed eggplant recipe as made by my cousin. The instructions are kinda the same as this one but, among others, uses fontina cheese and parmigiano reggiano.

Preheat the oven to 375 deg F. Cut eggplant in half lengthwise.

Scoop out the insides and place in a bowl. Set aside.

Place the eggplant halves in a baking pan. Brush 1-2 tablespoons of olive oil in the inner flesh of each eggplant half.

Sprinkle the eggplant halves with Italian seasoning until well seasoned. Next add the garlic powder and kosher salt.

Place the pan in the oven and roast for 40-45 minutes, or until the eggplant is fork tender.

While the eggplant is roasting in the oven, place a medium skillet on medium heat.

While the skillet is heating, chop scooped-out eggplant insides into bite sized pieces.

Once the skillet is heated, add the remaining olive oil. Stir in chopped mushrooms and chopped eggplant scoops.

Occasionally stir the mushrooms and eggplant until starting to brown (about 10 minutes).

Once the vegetables are starting to brown, remove the sausage from the casing and crumble it into the pan. Continue to stir until sausage is browned and fully cooked.

Remove skillet from the heat until the eggplant is done cooking.

When the eggplant halves are fork tender (a fork should easily pierce the flesh with no resistance), toss the marinara sauce and fontina cheese together with mushroom mixture. Taste the mixture again. If it tastes bland, add more Italian seasoning, garlic and/or salt.

Divide the eggplant, mushroom and sauce mixture into two portions and stuff each eggplant half.

Mix the provolone and parmigiano reggiano together in a small bowl until combined. Divide into two portions and top the eggplant halves.

Place the pan back in the oven for 10-13 minutes to melt the cheese. Remove from the oven and top with parsley. 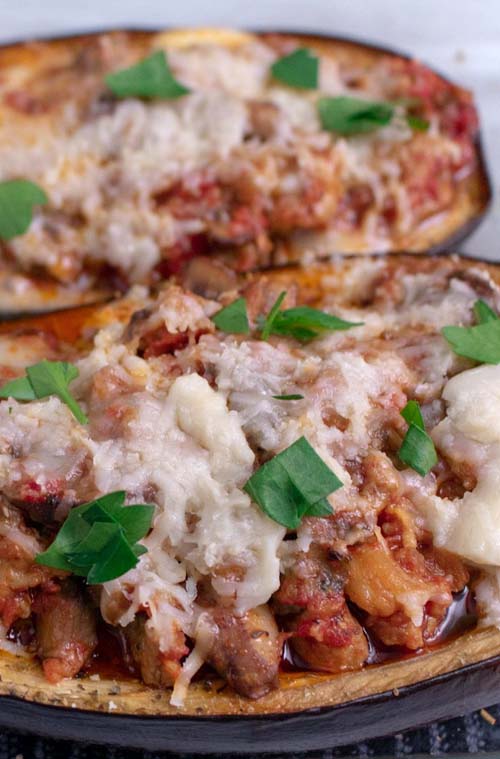