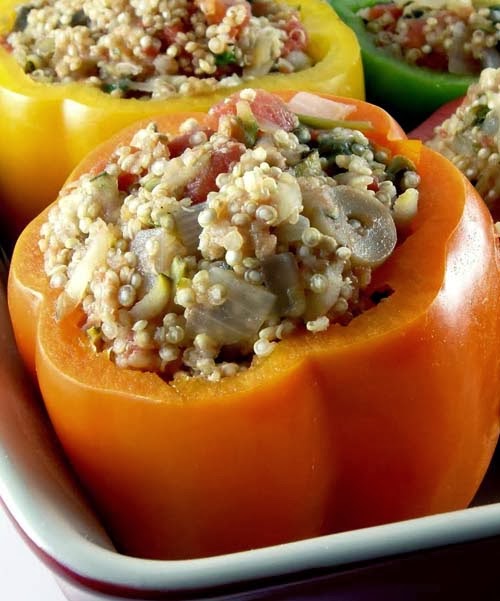 This is a variation of http://www.vegetariantimes.com/recipe/quinoa-stuffed-peppers-2/. I didn't have/use celery, carrots, cheese and black beans. Also, I incorporated less than the listed package of spinach and diced tomatoes because I used what we had leftover from prior cooking. The bell peppers were not cut lengthwise, but they were still cut in half. Additionally, I used a lot more quinoa than listed in the recipe since we had plenty of those.

Stir in quinoa and 2 cups water. Cover, and bring to a boil. Reduce heat to medium-low, and simmer 20 minutes, or until quinoa is tender. Season with salt and pepper, if desired.

Fill each bell pepper half with heaping of quinoa mixture, and place in baking dish. Cover with foil, and bake 1 hour or until tops of stuffed peppers are browned. Let stand 5 minutes. Transfer stuffed peppers to serving plates.

Serve with sriracha for vegetarian goodness.

I think that this is a great meal for those looking to lose weight because of the high protein and fiber content of quinoa. Not to mention that it's meatless to the delight of vegetarians. If I had the proper amounts, I would have put in more spinach and tomatoes for vitamins and nutrients. But sadly, I could only use what I had.
YOU MAY LIKE